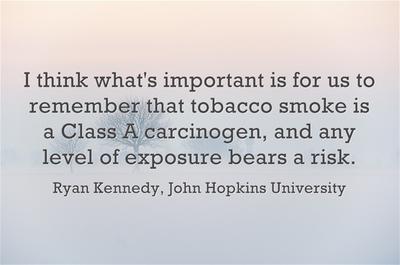 And that is why smoking should be banned everywhere.

The words of wisdom come from Ryan Kennedy, a tobacco smoke researcher at John Hopkins University, in Baltimore, Maryland

The quote was originally in response to an article on banning smoking on restaurant patios. And I'm all for that.

I can't tell you the number of times that I was in the midst of enjoying a nice meal on a patio, on the kind of beautiful summer day that makes your heart sing, only to have it instantly ruined by a mouthful of someone's tobacco smoke.

And even when I unhappily tried to continue my meal indoors, that gross smell of tobacco still lingered in my nose and mouth, making it almost impossible to taste what had been a delicious meal.

All the while I could watch (ok, glare) at the smoker enjoying the day on the patio. Interesting to note was how often the smoker wasn't even eating! They'd usually just be drinking and smoking.

Smokers say that smoking helps them lose weight. Ha! That's because the smoke destroys the smell and taste of food. And they probably are drawn to alcohol because they intuitively know that the alcohol will kill the tobacco smell in their mouth.

More from the article...

"..a new study suggests that even on an outdoor patio, secondhand cigarette smoke can produce air quality comparable to a smoggy day in Los Angeles or even a forest fire. "

The study was conducted on restaurant patios in Montreal, and here's another interesting finding from the same study...

Kennedy said he found "poor air quality even when there was a breeze and no restrictions blocking the flow of air, such as an awning or umbrella."

So why exactly does any intelligent society even allow this poisonous product to be sold?

I don't buy the argument that says people should have the right to knowingly harm their health, like alcohol or even over eating.

Unlike those instances, it's the not just the smoker that takes on the health risk - it is also EVERYONE around them.

In fact, let's be truly smart and extend the bans nationwide!

Please add your comments below...

All of the above quotes are from this article in the Toronto Star.