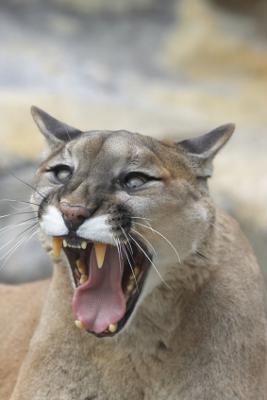 A six year old was enjoying an early evening hike with her parents and 9 year old brother on a trail in the Barrier Lake area of Bow Valley Provincial Park, near Kananaskis, Alberta.

A cougar leapt from the trees beside the path and attacked the smallest member of the group - the 6 year girl, walking behind her father.

Luckily, her father was able to scare the cougar off by throwing a water bottle at it and yelling loudly. The girl received puncture wounds and cuts, but was otherwise okay.

No doubt it helped that the cougar was relatively young - only two years old, and an estimated 36 kgs.

The cougar was later tracked down and killed by Albert Parks officials.

The animal had been previously captured and collared along with his sister, just two weeks earlier. The capture occurred because the sister cougar had "attacked an off-leash dog and cornered three cyclists near the Highline Trail on July 18.

Both cats had been captured in late June after following hikers near Banff's Tunnel Mountain. *

Conservation officers also said that the female cougar had been starving to death.

Again, park officials confirm that "cougar attacks on humans are rare", but nonetheless, sighting of cougars near areas where humans travel are increasing.

Also, this family did everything right. The family traveled as a group, and the child was close to her father, who was "armed" with a water bottle, and instinctively responded in the correct way to protect his daughter.

But.. the real point is that the cougar was starving, and so a young child will look tasty to any predator.

Park officials also said that it was likely that the cougars were separated from their mother and hadn't yet been trained to stay away from humans.

But how can we protect ourselves from that?

Have comments? Add them below!
Have your own story to add? Join in and write your own page! Simply click here to return to Animal Attacks.