A massive sinkhole, currently over 400 feet wide, is causing great concern for people in Assumption Parish, Louisiana. The story of the Louisiana sinkhole at Bayou Corne, is as large and uncontrolled as the sinkhole itself.

If ever you've thought that a sinkhole was nothing more that a large pothole, this ongoing news story will change your mind forever. 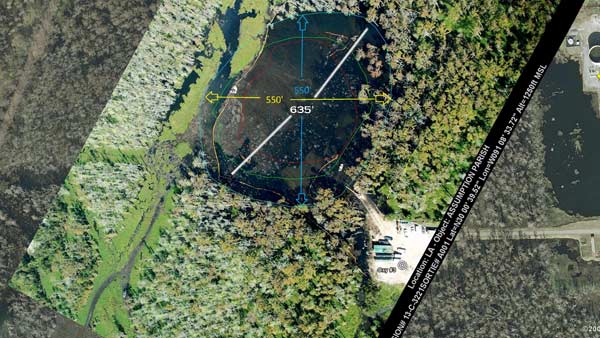 The news began in May 2012, with reports of strange bubbles appearing in a Louisiana bayou, determined to be evidence of a natural gas leak. By the 19 June 2012, an emergency was declared in Assumption Parish.

Then, on 3 Aug 2012, a giant sinkhole appeared overnight in Bayou Corne, Louisiana. The sinhole was deep enough to swallow 100-foot tall trees without a trace. That alone was dramatic enough, but sadly, the story doesn't end there.

The sinkhole began to grow, and continues to grow as this story is written in mid-October 2012. A state emergency was declared the same day the large sinkhole appeared in August, and residents in the immediate area were evacuated.

By mid-October, the sinkhole has grown to swallow almost 4 acres of land. The seriousness of risks associated with the sinkhole continue to grow too.

Near the sinkhole location are a number of storage wells of toxic material, and leaks have started to occur there too. Workers are frantically trying to pump out nearby wells of oil, butane, and natural gas to reduce risks.

Some serious damage has already been reported.

Natural gas has been found to have contaminated an aquifer in the area. Diesel is now part of the slurry water cover. A natural gas pipeline has become disconnected and now floats in the slurry. Luckily, the natural gas that had been flowing in the pipeline had been cut off earlier, or that alone could have been a disaster.

And catastrophic disaster is still a possibility, especially as the sinkhole continues to grow.

One of the biggest risks is the danger of highly explosive butane gas, stored in a salt dome nearby. The gas is highly explosive when exposed to the air. Some estimates liken a possible explosion to a nuclear bomb. While officials are reluctant to use that term, they do describe the situation as potentially "catastrophic".

Sinkholes can and do occur naturally. And it's also true that iin the last few years, they are occurring more frequently. As sinkholes appear in inhabited areas, the damage is that much greater.

But... in this instance, much of the risks and damage that has already occurred was entirely avoidable.