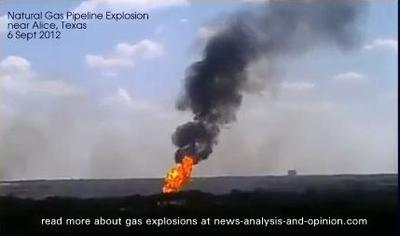 A natural gas pipeline explosion occurred on Thursday, September 6th, 2012, near a Copano Energy compressor station about 10 miles out of Alice, Texas (near County Road 118 And U.S. 281). Luckily, the explosion occurred in an isolated area, and no injuries were reported.

According to the local news video (below), onlookers said that it "looked like a mushroom cloud of fire", "like a bomb had gone off".

The fire occurred after an explosion on a 10-inch pipeline, gathering natural gas from the field and transporting it to a storage area. No immediate cause has been determined.

The fire, described as "extremely dangerous", slowly burned out overnight, after the pipeline leak was isolated, and natural gas turned off from both ends of the pipeline. However, containment became an issue after the fire ignited nearby grass. Eventually 10 acres of brush were burned by the fire.

The most striking thing about this gas pipeline explosion is that it occurred in the middle of a sunny day, in an un-manned field, with no obvious signs of vandalism or other cause.

An explosion big enough to create a "mushroom cloud" effect, and a fire big enough to shoot flames hundreds of feet in the air, and an almost immediate spread to nearby brush - yet the only mechanism offered to stop the fire is to shut off the supply of gas to the pipeline.

A week after the fire, no updates have been provided as to the cause of the explosion.

This is the 2nd natural gas pipeline explosion in Texas in less than two weeks. Just 10 days earlier, a construction worker hit a pipeline in McKinney, Texas, and injured two people.

In both instances, the fire was left to burn itself out after the pipeline supply was cut off.

The obvious "what if" question:
What if it was impossible to turn off the supply of natural gas to the pipeline?

These are questions to be asked again and again when a pipeline explosion occurs.

Have comments? Add them below!
Have your own story to add? Join in and write your own page! Simply click here to return to Natural Gas Explosions.