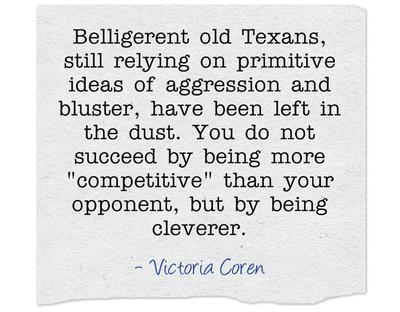 A pretty good summary of the kind of neanderthal approach to people that is all too common in business.

And life, for that matter.

The writer, Victoria Coren, is ranked 10th in professional poker rankings. Her comments come on the heels of bizarre comments from Stuart Wheeler, UKIP President. Wheeler, head firmly planted in sand, claims that women are "nowhere near as good as men" at games like chess and poker.

And then there's reality.

Coren points out that there are now "23 female poker millionaires in the official rankings list".
Here's the full quote from Victoria Coren in context:

Belligerent old Texans, still relying on primitive ideas of aggression and bluster, have been left in the dust. You do not succeed by being more "competitive" than your opponent, but by being cleverer.

In other words, Mr Wheeler's poker point proves that he overestimates the value of muscle. We have all realised this in poker, but the business world is glacially slow to catch on.

It is the masculine prejudices of the stock market, towards big-hat aggression and high-pressure manoeuvres, that led to the financial mess where we currently find ourselves. Macho competition on trading floors led to over-reaching, borrowed money, crashes – and subsequent demands for huge bonuses from the men who triggered them, on the grounds that this bull-headed approach is a rare and special skill.

It doesn't take much in the way of smarts to be bull-headed and aggressive.
Those who practice it however think they're successful when others capitulate.

What they are blind to though, is that most of us who give in to a bully's tactics do so only to shut them up and get them away from us.

It is NOT because they are skilled or clever in any way. And not many of us would think of them as successful.

The people who are truly clever, AND have managed to develop reasonable people skills are the ones who truly roar ahead in the long run.

They do manage to be successful without leaving a trail of ruin and resentment in their wake.

The challenge for all of us is not only to support the gracious leaders among us, but also to get better at sidelining the aggressive buffoons of the world.

Especially those in power.