An attack by any animal is scary enough.  But an attack by a rabid fox has its own special perils. 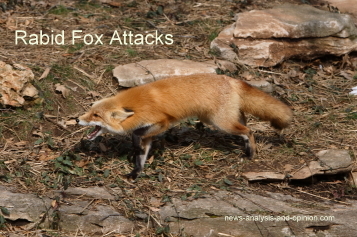 First of all, foxes are large enough to do real damage.  They also have a reputation for being clever, determined and unafraid - an animal worthy of wary.

Lastly, they are well established in many urban areas, and often have dens in urban parks.

Some of these rabid attacks have been captured on camera, and as you can see in some of the videos below, the attacks are sudden and unprovoked.

Take notice in this video below where the fox was hiding beneath a parked car, then suddenly ran out and attacked a man walking towards the parking lot.  He was hardly a threatening figure.

Luckily, he was 'armed' with a newspaper and was able to use it to help him fend off the fox.

The news item that really illustrates the tenacity of a rabid fox is the Arizona attack of a jogger.  It certainly isn't everyone that could run for a mile with a fox latched onto their arm!

Perhaps the scariest news of all though is this... Rabid fox attacks appear to be occurring more often.

As I have time, I'll post the news I come across.

Please, if you have news of a rabid fox attack, please share it here.

Here are a few stories to show what I mean....

This story is amazing on several counts.  The attack occurred in November 2008. while the woman was jogging on a trail in Granite Mountain.   That the attack occurred is awful, but you can't help but be impressed by this woman's strength and presence of mind in the face of the attack.  Here's a quote from the story in a local newspaper at the time:

" She was about a mile into her run, when she came upon a fox in a clearing adjacent to the trail. The fox did not initially appear aggressive, but as she backed away, he attacked by lunging at her feet. He bit her foot and then started towards her knee, at which time she grabbed him by the neck in an attempt to pull him away. When she did this, the fox bit into her arm and would not release his bite even as she tried to choke him. Assuming the fox was rabid and understanding that containing the animal for testing would be essential, she ran back towards car with the fox still maintaining a bite in her arm. Once at her car, she was able to pull the fox’s jaw open, release his grip on her arm, and wrap the fox tightly in a sweatshirt she had been wearing. She threw the fox into the trunk of her car and drove quickly to Yavapai Regional Medical Center.

At the hospital, the YCSO Animal Control Officer was bitten while removing the fox from the trunk.

In November 2007, a man walking alone along a lit path was attacked by a fox that was rabid and appeared from under a parked car.  Watch how he deals with the animal attack in this surveillance video...

This man is lucky to have been carrying a newspaper that he could use to fight off the animal.  And lucky also that he was wearing pants.  Imagine the same scenario if neither of those conditions were true.  Did you notice the time of the attack?  It's unlikely that there would have been many people around to come to his aid.  Makes you kinda want to always walk with a big stick, doesn't it?